I’m fortunate to have had a good couple of weeks of racing and I have been reflecting on why this is. Hopefully here are some takeaways for other runners.

As background my weekly training consists of the following;

All runners need to find a schedule that works for them but at the moment with a focus on relatively short cross country races (around 5 miles) this seems to be working for me.

The main difference in my training from previous years is one session less running per week and spending more time on cross training and strength work instead.  My two swim sessions a week are keeping my aerobic fitness up as well as my overall strength without overloading my knee (traditionally my injury hotspot). The core strength work, whilst I really have to motivate myself to do it, seems to be paying off as my glutes are strong.

Running mainly on softer surfaces is also contributing to keeping the old injury issues at bay. Plus I’ve spent more time on the ‘nice to haves’ of running such as stretching and sports massage to support my recovery and flexibility.

I’ve found a pre-race eating regime that works for me –  toast with peanut butter and jam a couple of hours before the race (as the races are only 5 miles, I don’t need to worry about taking on fuel during the race itself).

By having a relaxed train journey to races (as oppose to cycling) I’ve saved mental and physical energy.

During the race itself

My tendency has been starting too quickly, getting pulled along by quicker runners, using up energy supplies too early on and then fading in the last lap/ mile. I have worked on managing my pacing, focusing on running my own race and having the confidence to know that I can speed up as the race progresses.

Bringing in positive ‘self-talk’, thinking of positive feedback I’ve had in the past on my running, or focusing on the process of running – the mechanics of turning my legs over quickly and driving my arms – as opposed to thinking how hard it is, or how much further I have to go.

Drawing energy from supporters on the course, smiling out at them and encouraging other runners en route has helped me stay positive. There’s lots of science to say that smiling actually boosts your mood (as well as those around you). Remembering to be grateful that I can run… there have been times in my life when I haven’t been able to run, and there are likely to be more times in the future. Plus I’ve thought about people who I know who can’t run.

Keeping my cool when problems arise – for example I got stitch on the last lap I told myself ‘breathe’ and to exhale which allowed me to override the panic and pain. I did have to slow down, but I didn’t lose my position. 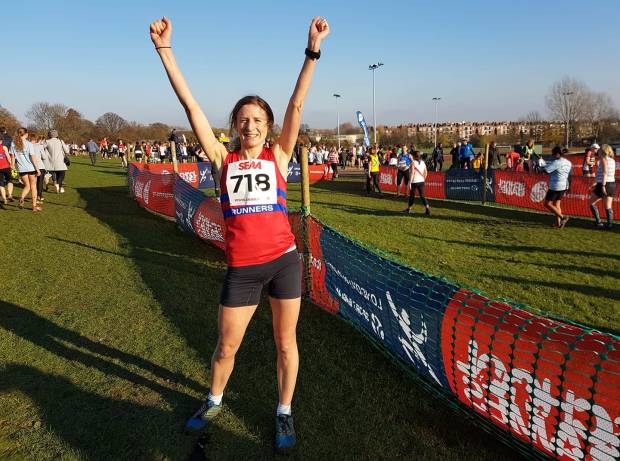